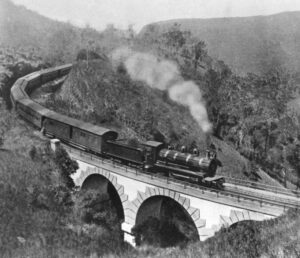 Chapter One – A Road THROUGH THE HEARTLAND   ©2023 Bradleigh Munk –

Slowly opening my eyes, I was caught off guard by the deep and intentional throb of movement, the source still unknown to my cloudy and dazed mind. Looking around I found that I was lying in a richly decorated berth and covered by several blankets, silky smooth to the touch. In the distance I could hear the high-pitched whistle of a determined locomotive pushing forward through thick gray clouds that threatened a change in the weather. It was dark and I had no idea where or when I was in time. What happened to Richard? I thought. The previous night I remember falling deep into the void with him holding on close. I wanted to explore this latest time slip; however, the rhythmic movement of the car began to lull me back to sleep. Pulling the thick blanket up over my head, I quickly headed back into the void with the agreement to explore my new situation as soon as the morning had presented itself. I was moments into my dreamworld when I was suddenly jolted awake, and to my relief, Richard was now lying next to me. I could tell that he was in a different timeline, and reaching out to hold on to him, my hand simply passed through, causing me to grab onto the edge of the sleeping berth. I wanted to pull my friend into my latest slip of time, but I had no idea how to accomplish this. Without too much effort, however, I sent out a burst of indigo energy, and we were again close and holding on. A little shocked he turned to me and said, “I can see right through you. The nightstand is as clear as if you weren’t lying here.” Without thinking I grabbed onto his shoulder, causing us to roll back into the car, narrowly missing the side rail of the bed. As soon as I had a clearness of mind, I turned to Richard and said, “Sorry to interrupt your sleep. I’m not sure how I fell into this timeline; I can’t imagine why we would be here.”

“We can’t afford the time off,” said Richard. “I’m scheduled to sit down with our producer, and we have to meet up with the band. Do you think you could pause this adventure for a moment?”

“I’m not sure,” I said. “Let me try something.” Sending out another burst of energy, like clockwork we had a swirling vortex that revealed a view of our bedroom, moments after we rolled out of it. “That answers your question,” I said. “We should be able to step back to the moment we left.”

“Do you have any idea where we are?” he asked.

“It’s a mystery to me,” I said. “All I know is that we are in a richly appointed sleeper car. I have no idea where we are going.”

“It sounds like we will need to do some exploring, when the sun comes up,” he said. “Maybe we should just settle in for the night.”

“That works for me,” I said. And with that, we both slid onto the cramped bed, spending the next hour holding on until we both drifted into the void.

My dreams surrounded me, and I found myself deep within a realm where free flying was possible. I was in the process of floating upward, to meet with an unknown entity, when I was suddenly thrust aside and pulled back into my current reality. All at once the car sharply turned, causing us to both roll off the bunk and land on the floor. Looking up from our vantage point, we attempted to right ourselves; however, a strong and unknown force began to pull us apart. As the car began to fill with a gray and white fog, we desperately reached for each other, but it was too late; the two of us simply blinked out of view. My mind began to race as time and space spun around me. Closing my eyes to avoid the dizziness, I was hoping that when I looked out again, I would be back at home lying next to Richard and our lives could move forward and avoid this latest detour.